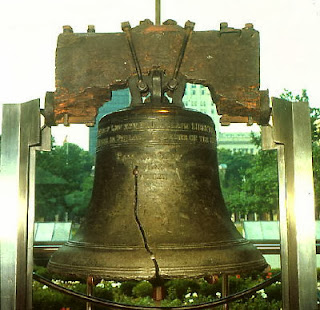 A Crack in Liberty

Our Lord Jesus prophesied certain events in the last days, and no one is arguing that we are in the last days.  He said it would be like the days of Noah, and that is definitely what our society has become.  Last time, I wrote about our dominion over earthquakes, in Part 1, and you can read that in a link at the bottom of this blog.  God prophesies deadly and destructive earthquakes, but that does not mean He causes them. They come from the curse on the earth, and the earth is in a death cycle and a sin cycle which is evident from bad weather, earthquakes and other deadly issues that we see.  I do believe that the sons of God can rebuke an earthquake to stop it or lessen it or cause the ground to shake, and cause one, as God's ambassadors and as the Body of Jesus on earth.

Scientists have said that there is a huge fault line right through the top and middle of the Mt of Olives, outside Jerusalem, and Jesus is supposed to return and set His foot down there first when He returns.  That Mount is already set up by fault lines to split open in a mighty quake as Jesus returns, and causes it.

The ground shook at the crucifixion, and many dead came back to life.  I am pretty sure that the Holy Spirit brought that earthquake to pass also, by the same power that raised Jesus from the dead. So what are the last days quakes for?  We know the earth is under pressure, no doubt from the curse and a fallen Creation, but God told us in Jesus' prophecies of Matthew 24 that we would see these happen just before He returns.  God does not have to cause them to use them as signs.  And they are signs that His return is very near.  Earthquakes happen at major redemption events and preceding them.

Now I will explain the Liberty Bell pictured above.  A crack in the fabric and infrastructure in America from a major disaster could not happen at a worse time than now.  America is a house of cards, and we are sick as a nation.  Christians need to pray now because a major event such as an extra devastating earthquake could collapse our economy.  This could leave America in a bad place and alter many lives. America seems to be heading to a police state, where the gospel of Jesus preached may not only be not politically correct, but also illegal.  Pray for America.  Pray that earthquakes bypass us, at least big ones that shut down services or commerce in many regions.  Pray for the government of America and its people and pray for righteousness to return to America through Godly leadership. Pray for the well being and salvation of the President, but I believe it also wise and Godly to pray for his removal from office, which could be done by Congress.

Our Liberty Bell is cracked, but where the Spirit of the Lord is, there is liberty. God has poured out His Spirit on all flesh. Let's pray His mercy into our land, the literal land, and the people too!

To read more about the novel, go to this website:
http://www.hungrynation.net

Posted by Greg Nichols at 5:00 AM No comments:

The Olivet Discourse of Jesus and Earthquakes! Part # 1 These are the words of Jesus given from the Mt of Olives to His followers as He shared about the last days, which we are in now. Certainly we have seen nations rising against nations, and Kingdom against Kingdom, all you need do is watch the nightly news.  We have seen many famines worldwide and my novel Hungry Nation speaks of a famine that may hit America. Scientific minds have never had more concern about diseases out of control, and that comes under pestilences. Lastly, earthquakes are mentioned by Jesus during these days. We saw one recently in Pakistan, and many others around the world.

I want to draw attention to America with respect to earthquakes.  It has come to my knowledge over the last several days that many believers are expecting a major quake in California from October 1 to October 3, 2013. That period begins today.  I do not believe that believers can stop the quakes predicted worldwide and in diverse places as prophesied by Jesus. I do however believe that we CAN through the dominion of Christ keep them out of our own backyard, and save lives or keep loss of life to a minimum. You see, I believe we have dominion over the devil, and this earth.

The current attitude has to do with the judgement of San Francisco and surrounding areas as it is compared to Sodom and Gomorrah.  But even then, God would have spared those cities for only 10 righteous.  If there is validity to these predictions, we can ask God to spare life in the S.F. area so that many more can be saved to eternal life.  Proportionately, there are many more than 10 righteous in that area and in California.  I awoke at 3 A.M today to pray for this land.  God took me to Romans 8. "For the earnest expectation of the creature waiteth for the manifestation of the sons of God."  Verse 19.  "For we know that the whole creation groaneth and travaileth in pain together until now.  And not only they, but ourselves also...." Verses 22, 23a.

When the earth groans, earthquakes often result.  We as sons of God also groan, and we also travail, and this travail is often a practice of deep intercession.  I am asking you, if you are given to intercession, to pray with me this week, strongly, especially the next few days.  I am pretty sure some serious earthquakes are coming to our land.  But let the sons of God (daughters included) pray for your own and others' regions, and stay God's hand to mercy, that He not have to bring His Word to pass in certain areas and in certain cases.

Daniel interceded to God and said, "...we do not present our supplications before thee for our righteousnesses, but for thy great mercies."  Daniel 9:18b

If you feel this is a Godly view that needs to be shared, please re-share this blog.

I will add to this blog regarding this subject more in these next few days, so watch for it.  You may subscribe and get a toolbar of this blog at the bottom of this page.

This link is the continuation of this teaching:
http://ourhungrynation.blogspot.com/2013/10/the-olivet-discourse-jesus-and.html

Study about angels with Greg:
http://www.wfministries.net/angelsorder.htm


To read more about the novel, go to this website:
http://www.hungrynation.net


Posted by Greg Nichols at 5:28 AM No comments: